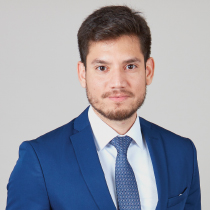 Roberth has been part of Grupo Gispert since the end of 2019.With experience in the areas of Procedural, Civil and Commercial Law, he is currently a lawyer in the law department of Insolvency Law.

After practicing at the Uria Menéndez Foundation together with the Ficat Foundation, he began his career in 2014, performing work to regain possession at the Diagonal Company real estate company. Later, he worked as a lawyer in the civil-commercial field of a French company located in Barcelona. Finally, he also dealt with the legal defense and management of portfolios of financial and credit institutions, in the Grupo Esco firm dedicated to Civil and Banking Procedural Law.